A Playlist For All the Moods of Social Distancing 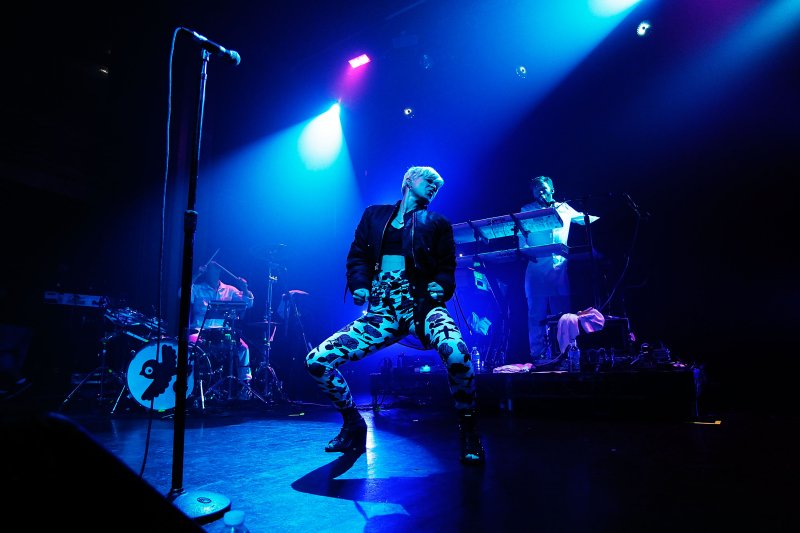 So you’re socially distanced. Maybe you’re self-isolated. You’ve run through all the latest shows to binge-watch (hello and goodbye, Tiger King) and watched the newest movies to come out on streaming services (cheers, Portrait of a Lady on Fire). You don’t have the attention span to read a book right now—coronavirus anxiety is real—and you’re getting more anxious yet listening to podcasts dissecting grim headlines.

Maybe it’s time for a reprieve in the form of music, respite in songs that feel like they were written for this moment. Many artists have already risen to the occasion since stay-home mandates started coming out, performing live on social media and via video platforms. Some have even written special songs about the current pandemic. But many songs released well before the current crisis also speak to what many are experiencing—both the highs and lows of solitude and the challenge of uncertainty. Here’s a list of tunes to help you through the many moods isolation can bring.

“If The World Was Ending,” JP Saxe and Julia Michaels

When singer-songwriters JP Saxe and Julia Michaels wrote “If The World Was Ending,” they didn’t know that the country would soon face a pandemic that would have many feeling like the world as we know it was, in a way, truly ending. The acoustic duet is a love song of sorts, and its primary mode is honesty; its characters just want human comfort and connection in the midst of uncertainty, which they arrive at through its sweet melody.

“People, I’ve Been Sad,” Christine and the Queens

“It’s true, that people, I’ve been missing out,” French pop futurist Christine and the Queens laments here, “and missing out for way too long.” Over hollow percussion and a slow beat, she unrolls an unflinching admission of her own isolation. This one also was released prior to social distancing, but seems quite prescient now. Heloise Latissier’s music has always harbored an undercurrent of longing; here, she expands that to include nostalgia.

In our current circumstances, that carefree feeling that might have felt easy to access prior to the coronavirus may feel like a past life altogether. Trevor Daniel, an 18-year-old rapper-singer with a viral TikTok hit under his belt, gets reflective about his mistakes on “Past Life,” though he admits he’s unable to do much about them. “Sitting here, talking to myself, thinking how I used to use you,” he sings. And yet there’s not a whole lot of action, rather like so many of us stuck in a feeling of stasis and isolation.

“When the Party’s Over,” Billie Eilish

One of Grammy-winning Gen Z star Billie Eilish‘s most delicate tunes, “When the Party’s Over” is about loneliness and its aftermath. It’s sweet and a little heartbreaking—all echoing, choral hums and Eilish’s stripped-down vocals—and might help cushion whatever feelings you’re experiencing.

Pain and loneliness are recurring themes on FKA Twigs’ last album Magdalene. “Home With You” starts as a kind of rap, her voice processed into a staticky echo over eerie keys. But then her ethereal voice floats up, light and pure: “I didn’t know that you were lonely; if you’d have just told me, I’d be home with you.” In our current circumstances, the lyrics might serve as a long-distance plea between people separated by stay-at-home orders—a song about the grief of forced separation.

Lennon was ahead of his time here. The minimalist piano ballad released in 1970 is an us-against-the-world lament: “We’re afraid to be alone,” he sings, “everybody trying to put us down.” But the sentiment feels universal now, his familiar voice reminding us that isolation happens in all kinds of ways to all kinds of people.

“Mind Is a Prison,” Alec Benjamin

“Sometimes I think too much, I get so caught up, I’m always stuck in my head,” pop singer-songwriter Benjamin laments on “Mind Is a Prison.” “All by myself, alone with my thoughts again / Guess my mind is a prison and I’m never gonna get out.” Without the rhythms of normal socialization to temper our inner voices, solitude can be a challenge that makes this song all too relatable.

Lorde’s last album, the aching Melodrama, is in turns celebratory and downcast. “Liability” is one of its most interior-facing songs, a ballad that grapples with the weight of a mind ill at ease. “I understand I’m a liability; get you wild, make you leave,” she croons. “The truth is, I am a toy that people enjoy ’til all of the tricks don’t work anymore, and then they are bored of me.” We are all liabilities to ourselves and others in one way or another at the moment; commiserate with Lorde, and let her soothe that sense of loneliness.

Post Malone’s top-charting hits have much more often been about low moments than high ones. “I Fall Apart” is no exception, a tune that respects our downs, as filtered through his overcast rap-pop sensibility.

“Dancing On My Own,” Robyn

Isolated? Robyn’s been there—and she’s a reminder that we can dance on our own, too, if only we have the right soundtrack to help us remember that we’re not the only ones going through it. It’s been 10 years since she released this song, but it feels more timely than ever.

Kassi Ashton, a rising country star, doesn’t mince words on “Hopeless,” which builds from a ballad to a foot-stomper. It’s about getting over an ex, but it might also work as a guide to moving forward and letting go of a past that we aren’t going back to anytime soon. “Maybe I should hope less, then I could care less,” she sings, “maybe I should feel less, then I could drop a couple tears less.” Like a stiff drink, it’s tough advice, but it might just help you through.

Mac Miller’s music is filled with wry, honest reflection; “Self Care” shows an internal struggle between malaise and hope. Still, the latter wins out here: “I’m treatin’ me right,” he insists. “We gonna be alright.” The song is slow and dreamy, a rap that’s more like a reverie, but tinged with the heartbreaking knowledge we have now that the young rapper would die months after the song’s release.

“Cruel World” is gorgeous; beautiful opening strings, layered choral vocals, an echoey beat that doesn’t rush. It’s equally sweet: “Keep your head up, hold your head up, even though it’s a cruel world.” Active Child is the project of singer-songwriter and multi-instrumentalist Patrick Grossi, and songs like this one are full of generosity, a salve against darkness.

“Somebody That I Used to Know,” Gotye feat. Kimbra

Remember this one? It was a hit that came from nowhere but captured the airwaves with its tinkling melody in 2011, and its message reemerges as relevant today: “Now you’re just somebody that I used to to know” feels like an apt description of the socially distant friends and colleagues many of us only see through screens now.

“Pray For Me,” The Weeknd feat. Kendrick Lamar

The Weeknd’s music is characterized by melancholy; one of his albums was even titled My Dear Melancholy. “Pray For Me” with Kendrick Lamar, a one-off for the Black Panther soundtrack, is slightly more positive. But it’s still about overcoming pain, over an insidious, dark beat. “Who need a hero?” Lamar asks—and, well, we all do.

“Are You Bored Yet?,” Wallows feat. Clairo

This light rock song is technically about a relationship (and the insecurities therein), but it works for moments of quarantine, too. This is a time of fear, illness and anxiety, but the more mundane works its way in, too.

“Hope is a dangerous thing for a woman like me to have, but I have it,” Lana Del Rey

No one does nostalgic references and haunting contemporary balladry quite like Lana Del Rey. “I’ve been tearing around in my f-cking nightgown, 24/7 Sylvia Plath,” she croons here, on one of her songs off of the acclaimed Norman F-cking Rockwell. “Don’t ask if I’m happy, you know that I’m not, but at best I can say I’m not sad.” She even has a lyric about making a call on an iPad, a foreshadowing to our new reality of constant videoconferencing. Sequestered at home as many of us are, switching only between night pajamas and work-from-home pajamas and trying to stave off sadness, Del Rey’s lyrics are suddenly hitting with new relevance.

“Take me back, Josephine,” Americana singer-songwriter Carlile croons, “to that cold and dark December.” Even a dreary winter is preferable to the present uncertainty as springtime arrives; and for those of us dreaming of non-isolated days ahead—or remembering those behind us—her message hits its mark.

Johan Lenox makes pop with an orchestral backbone; “Cancel the Party” feels like it’s written from the perspective of a world-weary old soul, and speaks wisdom in its lyrics. Sometimes—as now—it is best to stay in, and stay alone.

Colombian-American singer Kali Uchis turns reggaeton into something soft and melancholy in “Solita.” “Bailando aquí sola, como a mi me gusta,” she sings in the chorus: Dancing here alone, as I like. We could all do with a little of her confidence.

“Wake Me Up When September Ends,” Green Day

At this point, some are predicting social distancing will last through the fall. If you’d prefer to hit fast-forward and hibernate until then, simply turn to Green Day’s 1994 classic.

“To Be So Lonely,” Harry Styles

On his sophomore album Fine Line, Harry Styles explores all kinds of glam-rock styles. “To Be So Lonely,” with its tender guitar trills and acoustic beat, is Styles at his most reflective as he muddles through a breakup. “It’s hard for me to go home and be so lonely,” he sings. A few months after this song came out, it feels more relatable than ever.

“If I Could Turn Back Time,” Cher

“Leaning on Myself,” Anna of the North

It’s not always easy to go it alone, but the low-fi pop of Norwegian singer-songwriter might help. “Leaning on Myself” is soft but uplifting, an anthem for figuring things out independently—and finding subtle joy in that self-reliance.

We could also use a little assistance in getting through this time together. The 1965 Beatles classic, written primarily by John Lennon with a little, er, help from Paul McCartney, is a reminder of the importance of keeping connections intact and recognizing the fragility of our mental health. There’s nothing to be ashamed of; we just need to hold each other up.

When she released the lead single for her much-anticipated sophomore album Future Nostalgia this winter, British pop star Dua Lipa could not have expected just how on-the-nose the lyrics would become. But the hit disco-pop tune has lessons for us all as we practice social distancing: “Don’t show up, don’t come out,” she dictates; “walk away, you know how.” It’s meant to be a kiss-off to a scorned ex, but it also works as a reminder about keeping our space while we try to flatten the curve. If isolation is getting you down, you can sing along with Lipa and find some joy in the experience.ther